A few years back Brian Kenney introduced the hashtag #KillTheWin, which still lives on. Baseball fans point out egregious cases of a pitcher getting a win in a game despite pitching poorly. While the win might have been a useful metric for pitchers in the dead-ball era, when starters completed more than half their starts in aggregate, as baseball has evolved and bullpens have risen in prominence, the definition certainly has its flaws.
But it also has its history. Baseball fans still marvel at Cy Young’s total of 511, a seemingly impossible goal. While it’s become less common in the 21st century, a 20-game winner was once a standard of excellence among pitchers. Killing the win loses touch with that history. So instead, perhaps, we should consider trying improve it instead. In 2014, Tom Tango proposed a complete redefinition, a simple points system that would usually determine the pitcher most deserving of a win (or loss) in a given game. I wrote about the idea, and created a page to compute wins and losses under that proposal. Recently Tango e-mailed me with a different idea: suppose we keep the basic structure of the current rule, but instead of giving the win to the pitcher who recorded the last out before a team takes its lead for the final time, we give it to the first pitcher whose line for the game closes in a position to win the game, so long as that pitcher’s team still wins.
Okay, that sounds pretty confusing, but the idea is actually quite simple: even if the bullpen gives up your lead, you still get the win so long as your team wins the game. Fantasy baseball owners often lament having a starter pitch a great game, leave with the lead, only to see the bullpen give up the win, costing the starter the win. A good example is the Red Sox/Blue Jays game on April 20th: starter Chris Sale pitched 8 shutout innings, exiting with a 1-0 lead, but closer Craig Kimbrel gave up a solo homer to Kendrys Morales in the bottom of the 9th to tie the game. Kimbrel wound up as the winning pitcher when the Red Sox scored 3 runs in the top of the 10th. In this case, Kimbrel actually pitched well overall, striking out 5 of the 7 batters he faced over two innings, the lone blemish being Morales’s game-tying home run. Still, Sale’s fantasy owners were no doubt livid (well, he’s on my AL team this year, and I was livid) at losing a win through no fault of his own.
Under Tango’s latest proposal, the bullpen would no longer blow a win for a pitcher if the team ultimately wins the game. So in this case, Sale would get the win, because he left with the lead and his team eventually won.
I’ve written a page to implement this, as I go through each game and figure out the first pitcher on the winning team to exit with a lead, and call that one the winning pitcher. Technically, by “exit with a lead”, I mean that their team is still ahead after all the runners for which the pitcher was responsible either score or the inning ends. So if a starting pitcher leaves in the eighth with a 1-0 lead and a runner on first base, and the bullpen allows that runner to score, then because the run is charged to the starter, I count that as *not* leaving the game with a lead. Still, the net effect of this proposal is to shift a lot of wins from relievers to starters. I’ve also added some tooltips – if you mouse over the win totals on the page, I’ll show the dates of the games the pitcher gets a win; if you mouse over the column of the difference in wins, I’ll show the dates of the games where either the pitcher gets a win under the new proposal but not the existing rule (prefixed by a “+”), or where he does not get a win under the proposal, but does under the existing rule (prefixed by a “-” sign). 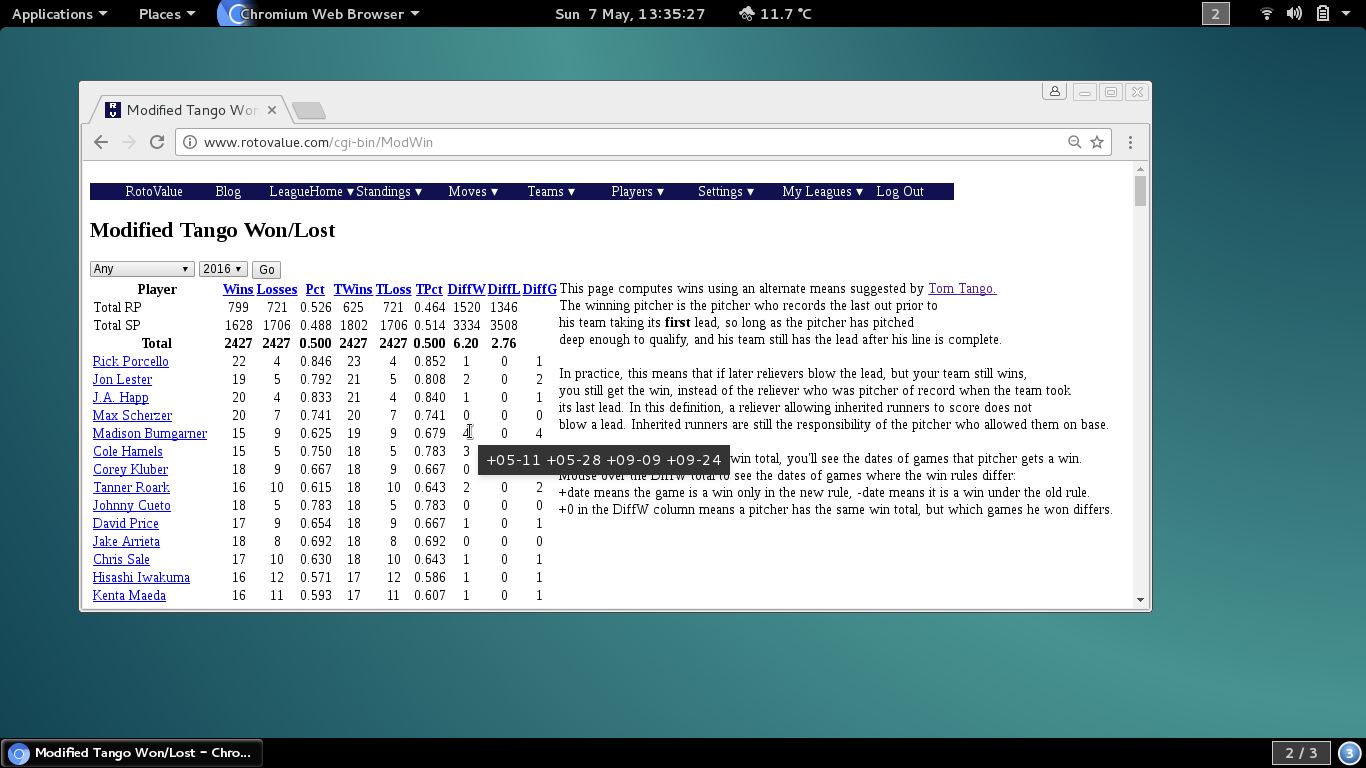 The above image shows the page for 2016. Note Madison Bumgarner goes from having 15 wins under the official rule to 19 wins, with the tooltip showing that under the new rule, he would also be credited with wins on May 11, May 28th, September 9th, and September 24th. It’s also interesting to see that the aggregate winning percentage of starters rises from .488 under the current rule to .514 under the proposal, while relievers’ winning percentage drops from .526 to .486. More decisions go to starters now, which seems reasonable. Interestingly, the points-based alternative Tango and I discussed back in 2014 moves fewer decisions to starters, and actually results in Bumgarner’s win total declining from 15 to 14: 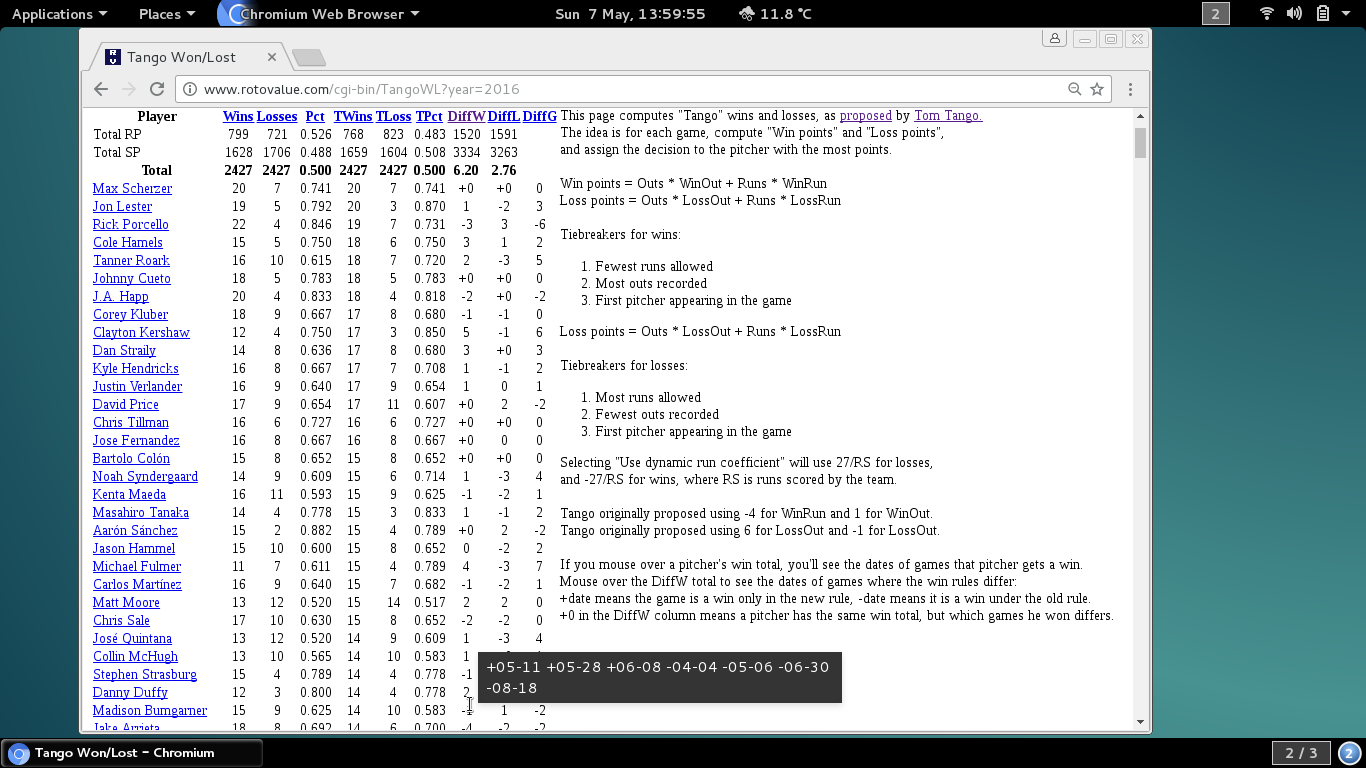 While Bumgarner still gains wins on 3 dates where he didn’t get them under the official rule, on four other games the points algorithm credited a win he got under the current rule to a reliever instead.
Overall, I prefer the points-based rule for assigning wins and losses, because it takes into account how many runs a pitcher gave up, and how many outs he got, and not simply whether he left the game with a lead or not. While this modified proposal does not consider how effective a pitcher was, it does take into account context. Giving up runs with a big lead might cost a starter a win under the points-based proposal, but not under this modified proposal. Both, though, seem to me to be a significant improvement on the existing rule. And if either were adopted officially, owners fantasy leagues that still count wins as a category will have less cause for heartburn during the season.