One fun feature of RotoValue is Projected Standings. While we don’t know what the future will hold, we can guess about it, and the page lets you do exactly that.
My long-time NBA league had its draft last weekend, and now all the rosters are loaded, so we can see which teams look strongest. So far, my team looks good: 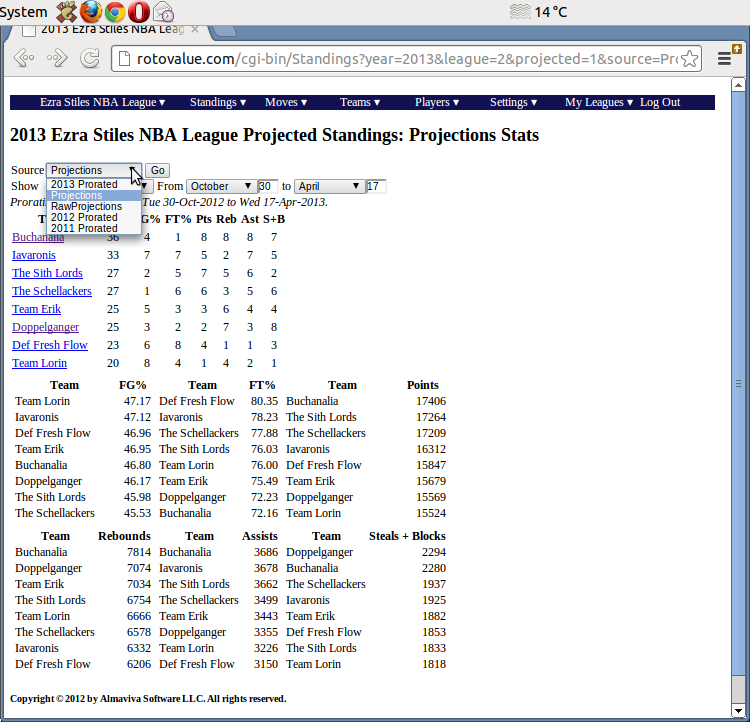 Yes, I bought Dwight Howard, so I project last in FT%, but his other strengths make up for it, as I’m on pace to be first or second in all our cumulative categories and so total 36 points in the 8 team league, which puts my team on top. Interestingly, despite Howard, I’m not projected to win FG%. You can click on the image to go to the interactive page to see the numbers, or to tweak things. The stats I’m using above are the projections from my own site, and since I was bidding/drafting off an earlier version of those same numbers, it’s not too surprising I should project to be on top as of now.
I do want to highlight that Projected Standings can use other data sources. We can try again with prorated 2012 statistics: 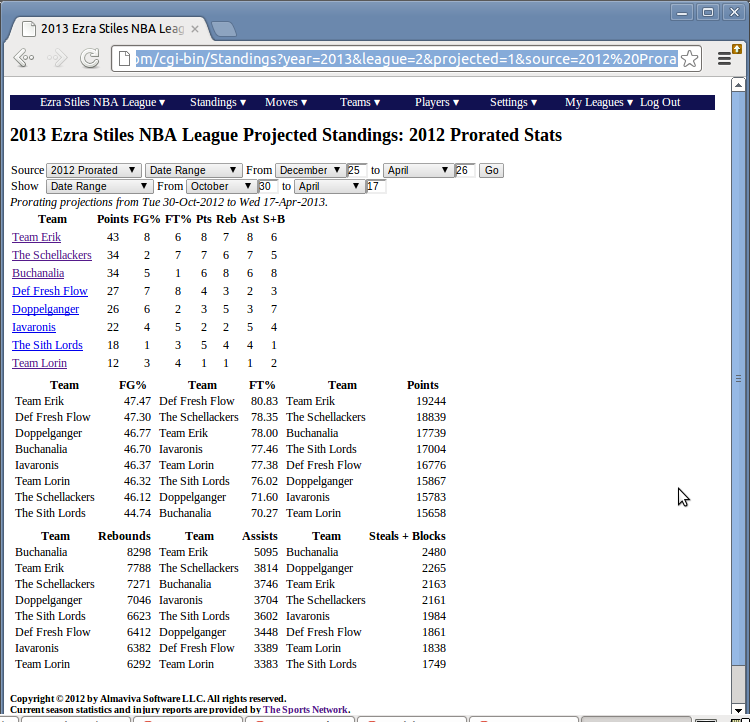 Now my team still does well in rebounds and steals + blocks, but Team Erik has a huge lead over the field, finishing no worse than 3rd in any category. If the past is prologue, then Erik will win going away. From the page you can click on a team’s name to see the breakdown of stats for the individual players, and what makes Erik’s dominance in 2012 prorated stats more impressive is that he’s starting #1 NBA draft pick Anthony Davis, who has no 2012 stats to prorate because he was in college last year! My team has #3 pick Bradley Beal, but Davis should provide more value. Why the big discrepancy between projections and 2012 data? Well, Erik has a lot of old players: Steve Nash, Tim Duncan, Kevin Garnett, Paul Pierce, Richard Hamilton, Manu Ginobili, and Andre Miller are all at least 34 years old, and my projection model is not kind to old players. While individuals of course will vary, as a group, older players get worse each year, and they’re a good risk for quite a steep drop-off in production. I also suspect they tend to be more injury prone than younger players.
At this stage the stats are all projections (or prorated data from prior years), but once the season starts, Projected Standings will combine data from games played with projected data to cover the future games, and so it can be an interesting glimpse at how the rest of the season may go. The stats source doesn’t need to be the whole season, either: you could prorate stats over just part of the season by entering the dates you want. This can be useful if you want to look at, say, a period after a player became a starter, or after he came back from injury. When prorating historical data, I’m assuming players miss time at the same rate they did over the historical period, so if someone missed half his team’s games in the source period, he would project to play in only half the remaining games.
Projected Standings blends current year data with some form of projected data – either prorating past data or using projections – to see how the final standings might wind up. It can be a fun and interesting read on how your team is composed, and it can point to category strengths and weaknesses. But don’t get complacent if it shows you on top (or despondent if you’re at the bottom) – often prognostications are far off the mark!
Update: Because the projection model uses preseason data for rookies, and then adjusts playing time for all players, the numbers in the images will no longer exactly match the pages they link to after I update the projections. And once the season starts, regular season data will be part of the pages also.