RotoValue computes prices for players given some set of statistics, and using past data, it can tell you how much players were worth last year, or in other time frames. But what matters most is how players will perform in the future. To try to estimate that, I’ve worked on a regression-based projection model.
I’ve uploaded the output to the RotoValue site for NBA 2012-13.
The raw model looks only at historical data, and is solely algorithm-driven. Thanks to Doug’s NBA & MLB Stats page, I have over 20 years of back data, from which I try to infer how a player’s per-minute statistics tend to change as they age. My model assumes a player’s rate is a function of his age and a “skill” level which best-fits against his past performances, and thus to project into the future, I extend that regression curve for each stat/player.
This is my initial cut “raw” projection, and you can see it here. This model is pure number crunching with no human input beyond defining how the model itself works.
It’s a decent first effort, but I add another layer to address three concerns.
The first concern is rookies: I have no historical data for them, and thus the initial model ignores them entirely. But that’s not correct: some rookies will indeed have a significant impact. What to do? On the theory that it’s better than nothing, I extrapolate limited preseason data. So rookies start out with their preseason per-minute averages. But most rookies play more in the preseason than they will when the games count, so I check against projected depth charts (provided by The Sports Network) and cap a rookie’s minutes unless he’s projected to play with the first team. Second team players are capped at 15 minutes per game, third team at 10, and 4th team at 5. For example, Mavericks’ second-round pick Jae Crowder is averaging over 21 minutes per game (and 15 points!) in the preseason as of this writing, but since he’s not projected to start in the depth chart, the projection reduces his minutes to 10 per game, lowering other stats proportionally.
Next, there are players with known injuries. Derrick Rose may miss the entire season, and is certainly out until at least the all-star break. So for players with known injuries I make a rough estimate of the part of the season they’re expected to miss, and reduce their statistics accordingly.
Finally, I try to “normalize” playing time across each team: I add up minutes for each team and see if the total is too high or too low. I assume each team plays 5 players at 48.4 minutes per game (the extra is to allow for overtime games). For teams that fall short, I look to give extra time to players, while for teams that go above, I look to take away time from weaker players expected to get it. The rookie time caps still apply, but rookies on teams that need more playing time can be pushed up if they’re listed as starters.
So here’s the most recent projections with adjustments for injuries, using preseason stats to project rookies, and playing time normalization (click on the image to go to a Search screen letting you tinker with filtering the data): 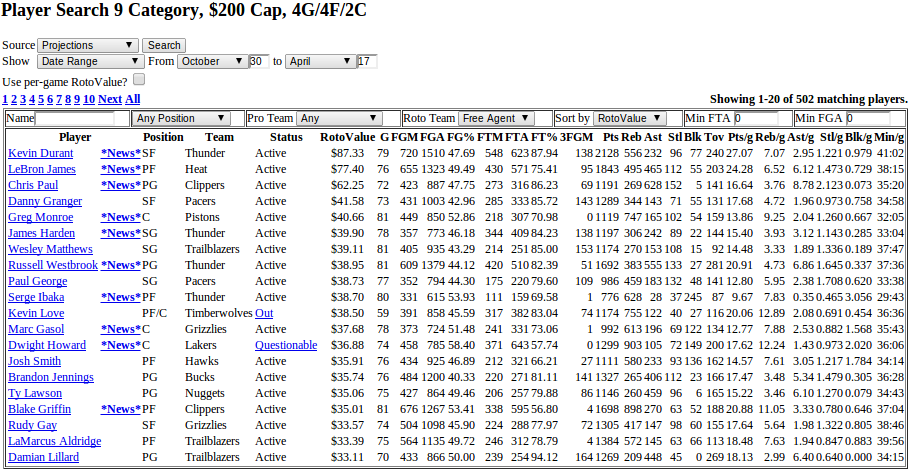 An earlier version of these projections was used to generate the initial top-80 player list for my league’s hybrid auction/draft for this season.
I don’t usually play a 9 category format, so some of the highly ranked names surprised me – shooting guards like Wesley Matthews and James Harden didn’t immediately come to mind as elite players, but their combination of low turnovers and hitting lots of 3s is quite valuable in that format. Harden was actually the top SG in this format last year, boosted by hitting over 49% from the floor.
Not surprisingly Kevin Durant and LeBron James project to be a clear top two, with Chris Paul far behind (but far ahead of other players). Here are 8 category rankings for the same projections (again, click on the image to go to a page for filtering):

Without turnovers, centers and point guards rise in value compared to other positions, but the top 3 remain the same. Note that Damian Lillard, the projected starter in Portland, shows up especially high in this format. I don’t really expect him to be a top-5 player (or even a top 5 PG), but he has posted impressive numbers in the preseason, especially shooting. He’s certainly a player worth watching, and he may wind up as the year’s most valuable rookie.
Even removing just one category makes a big difference in the rankings, so it’s valuable to have something customized to your format. RotoValue Analyst adapts its pricing to however you’re scoring, and even lets you change weights used in computation, so if you’re giving up a category, or find one category particularly tight, you can tweak weights and search for free agents that can help your particular team more.
Bear in mind the projection-based prices are only as good as the projections, and predicting the future is far from easy. The numbers do provide a good guide for price ranges and breaking players into tiers. But remember that actual dollar values are affected by not only your scoring categories, but also your league’s roster sizes, number of teams, and even the positions where players qualify (something RotoValue lets you override if you want to). No one set of numbers should dictate your draft or auction strategy, but they can help you inform your decisions and put your own opinions in a clearer context.